In which we go way back....and I thank people for helping us with history.

Since starting this project almost two years ago now, I have been excited to occasionally get some historical information from people about the building.  Some have gone so far as to send me photos they find, others have filled in the blanks with newspaper articles or bits of anecdotal information. Recently a Three Tides friend passed me a couple of photos of the Ocean House.  The first one below was a photo that we already had and that has been the basis for our renovation of the Ocean House.  But Dave, who gave us the photo, found a much better copy than we had previously had  The building details are clear, and I can even read the signs posted outside the front door!  Dave works in the archives at the Penobscot Marine Museum, whose collection includes thousands of glass plate negatives of buildings and events in the surrounding towns.
Anyway, as I said, the photo below is what we used as the basis for the renovation.  Some people have asked me why the front of the building is not clapboarded like the sides of the building and that is because we found the original facade underneath a later set of clapboards.  We knew they were original because we strained our eyes for a couple of days at the grainy copy we had of the photo below.  The porch is based on the photo below, as is the restoration of the center door on the second floor and all the large windows on the first floor. 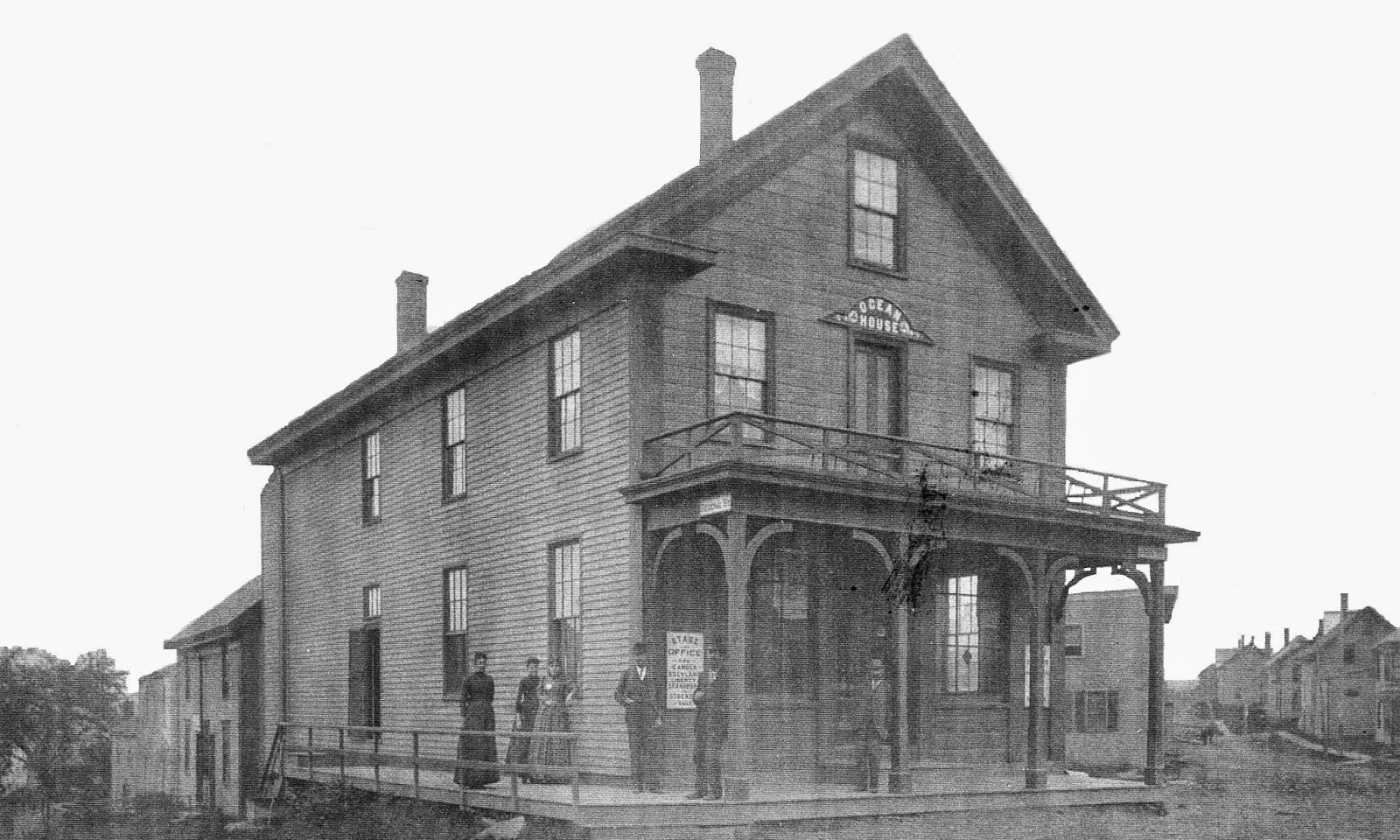 What we didn't have until a few weeks ago was this photo, showing all the details of the trim, the door, the windows on the first floor, etc.  I always thought the front window frames on the first floor were somewhat original, but that appears to be untrue.  Here the windows are taller and narrower with mullions in between the glass panes. In the photo above, one can see that more of the front facade shows under the windows and the trim makes a bit more sense than it does today. What I find interesting is how low the porch is in these photos, but then I saw that there are two steps on the porch to get into the front door..a detail we were not able to see in our grainy photo. Today, the porch is higher on the building to accommodate our handicapped ramp. One can step onto the porch or walk up the ramp and walk right in the front door.
Greg's comment was:  Too bad the "Ocean House" sign is so ugly!  One day soon, there will be another Ocean House sign on the building, but it probably won't look like this one. 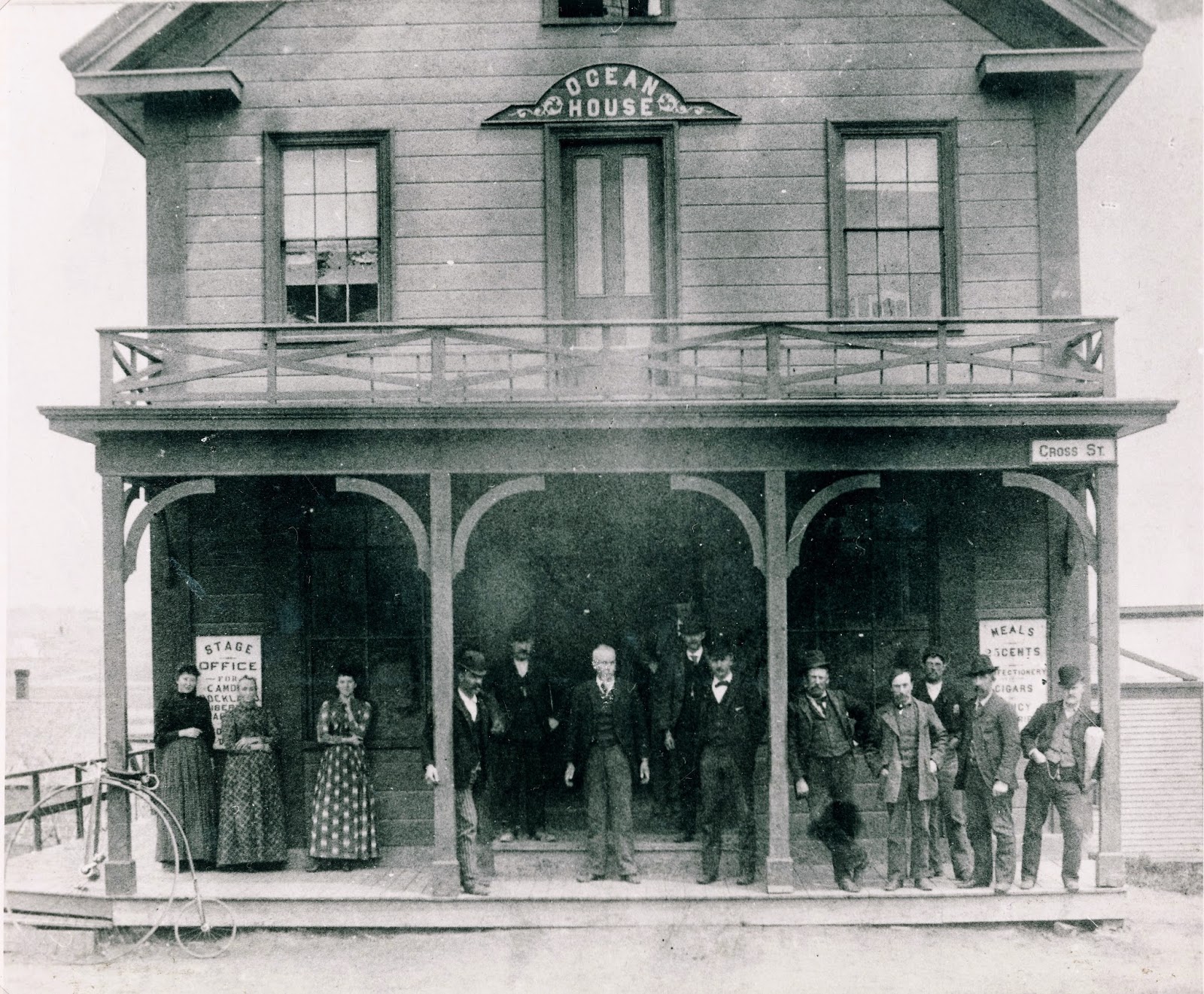 Dave also sent me this clipping, which I had had from Megan Pinette of the Belfast Historical Society as well.  Apparently work on the now absent barn started on August 30, 1917.  I still lament that we had to take the barn down, but it was about to fall over...just like the Ocean House!

What I love about this photo, which I believe came from a paper in the 1920s is the addition to the first floor on the Federal Street side of the building.  It must have been a stage office or something.  You will note that by this time the door on the second floor was filled in (and this is exactly the way we found it, with the clapboard covering over the opening, but leaving the frame.) and that the first floor front windows have been replaced with what we currently have.  As I said, I thought these windows were original, but perhaps they were replaced when work started on the barn.  The porch had been replaced with a roll out awning....which I sometimes think would have been a much cheaper solution than putting the porch back on...but c'est la vie, non?  I also note that the front windows were lowered, and less facade showed at that time.  I think you might be able to see that the front doors were flush with the facade before being retrofitted in the 70s or thereabouts. 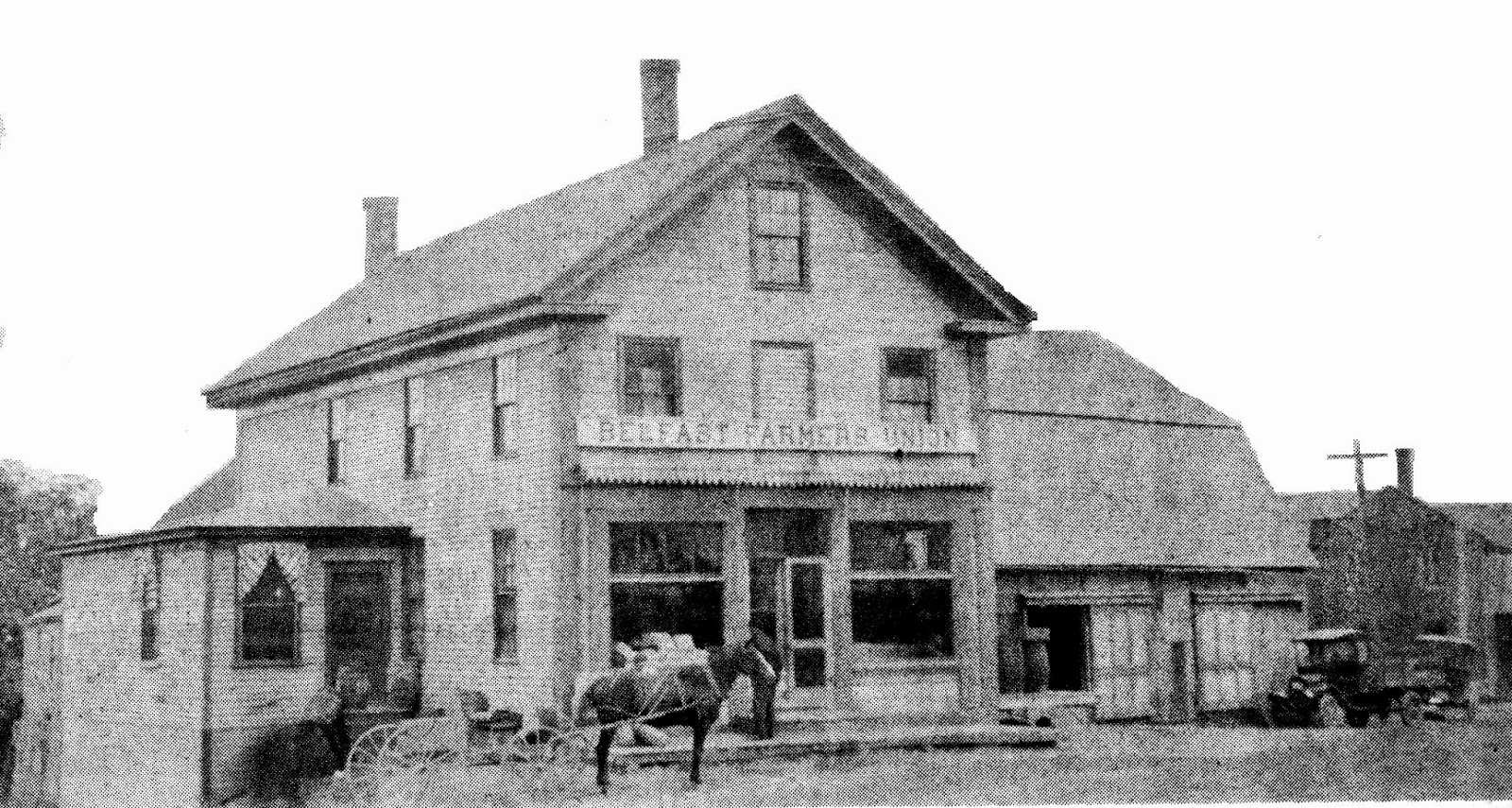 I can't rightly remember, but either Megan sent me the photo below or someone posted it on facebook.  From the car out front, this could be a photo dating from the late 70s or early 80s, probably around the time the property changed hands from Herb Staples to the next owner, from whom we purchased the property.  You can see that by now, the front door has been recessed.  You might remember my discussion of this from an earlier post where we found that the original front doors had simply been propped open and made into the recessed walls in 1960.  Also note that the asphalt shingling was put over the second floor door and the second floor windows replaced.  I just noticed the bundle of rail road ties in the foreground, used to make planters in the front of the building.....planters which were still there when we bought the place.
Boy, it was a sorry looking place then...and hardly anything else was done to it for 30 years more! 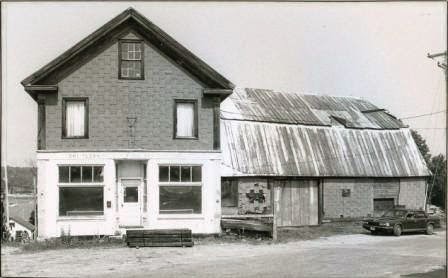 A photo of Herb Staples that I pulled off Facebook.  Herb owned the Ocean House for decades, his family lived on the second floor and he operated a machine shop and a motorcycle repair shop in the back lot (so told me by Al from EBS who sold me the windows and doors for the building.  He worked there as a teenager)  You can see the barn in the background. 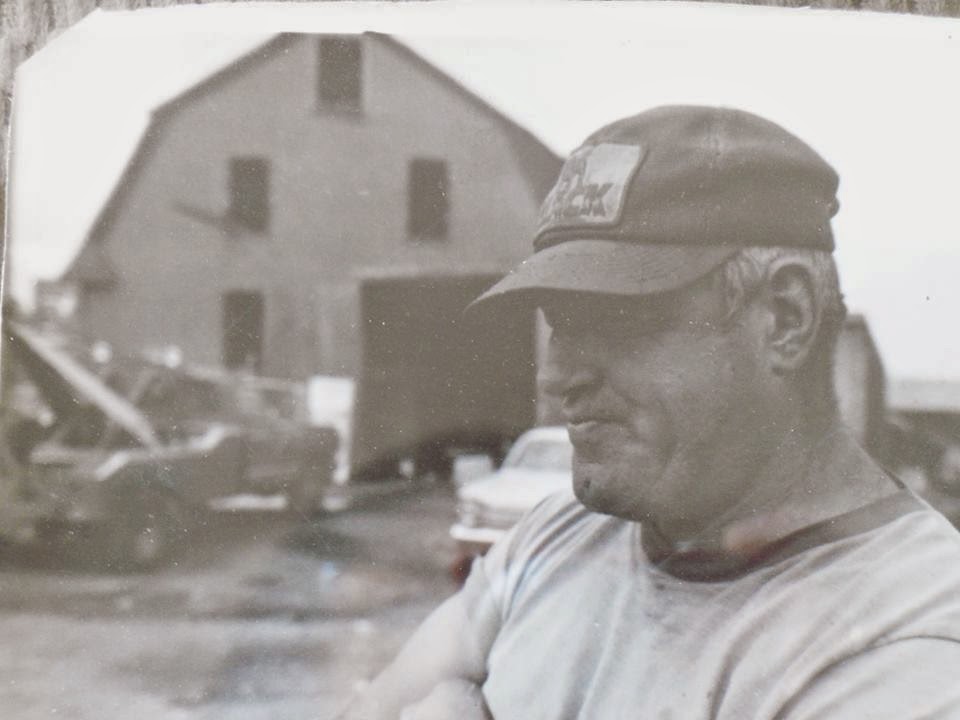 aaaaand the obligatory picture of us in about the same place 30 years later. 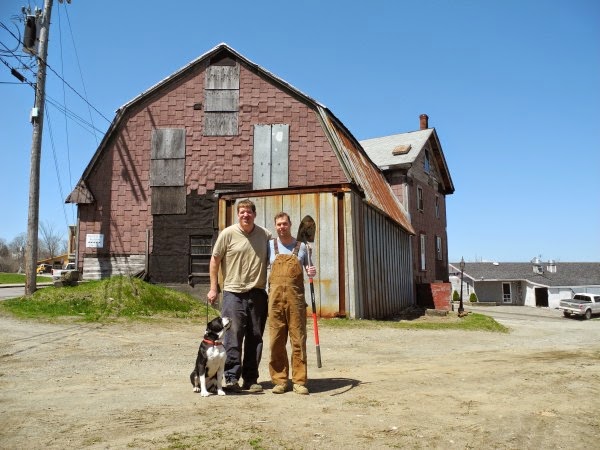 October 2012 right before we bought the place.  The asphalt shingling on the front of the building was replaced with clapboard and painted red...covering up and protecting the original facade. 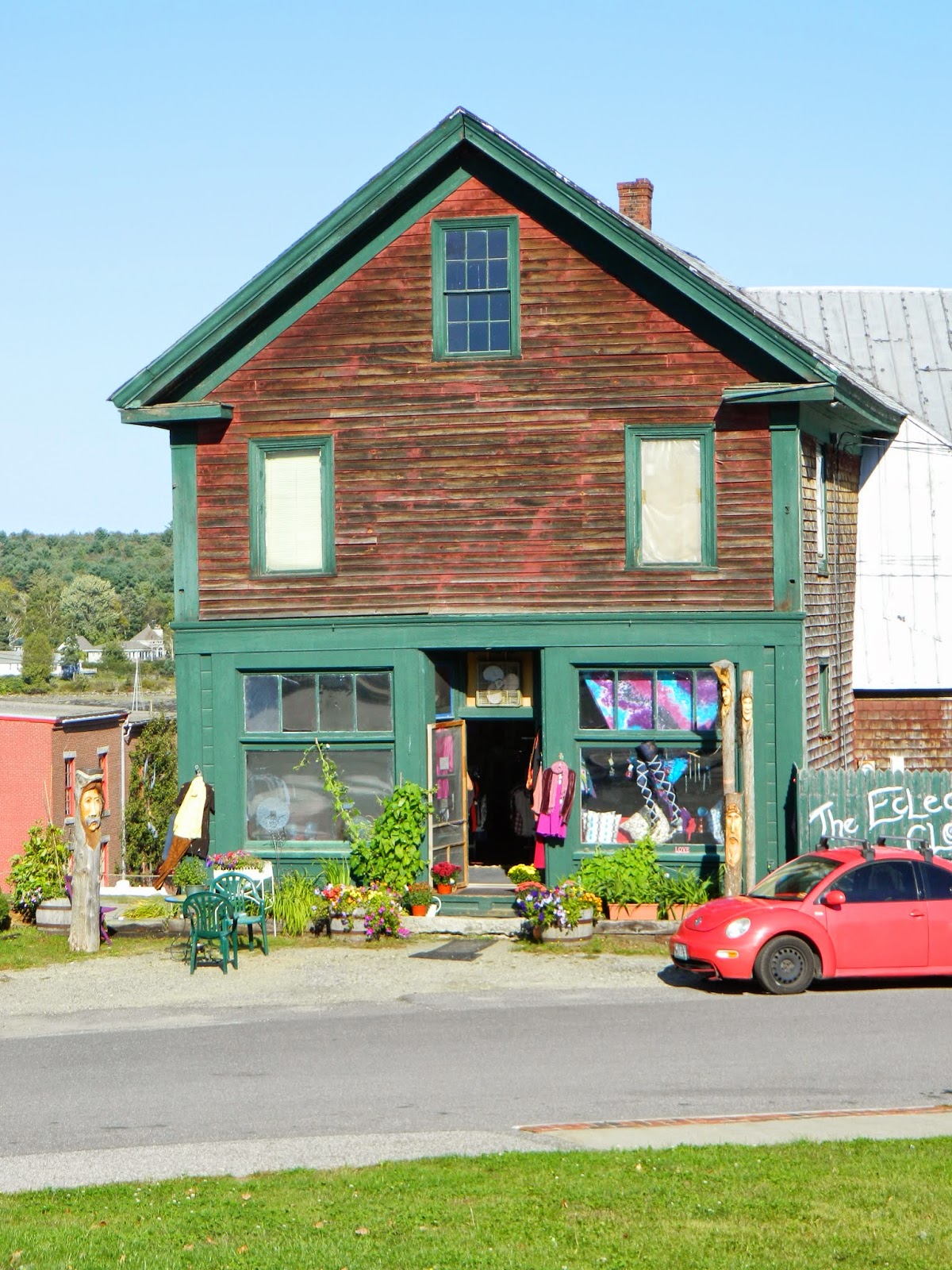 If you have been reading this blog faithfully, you know the rest of the story so far! 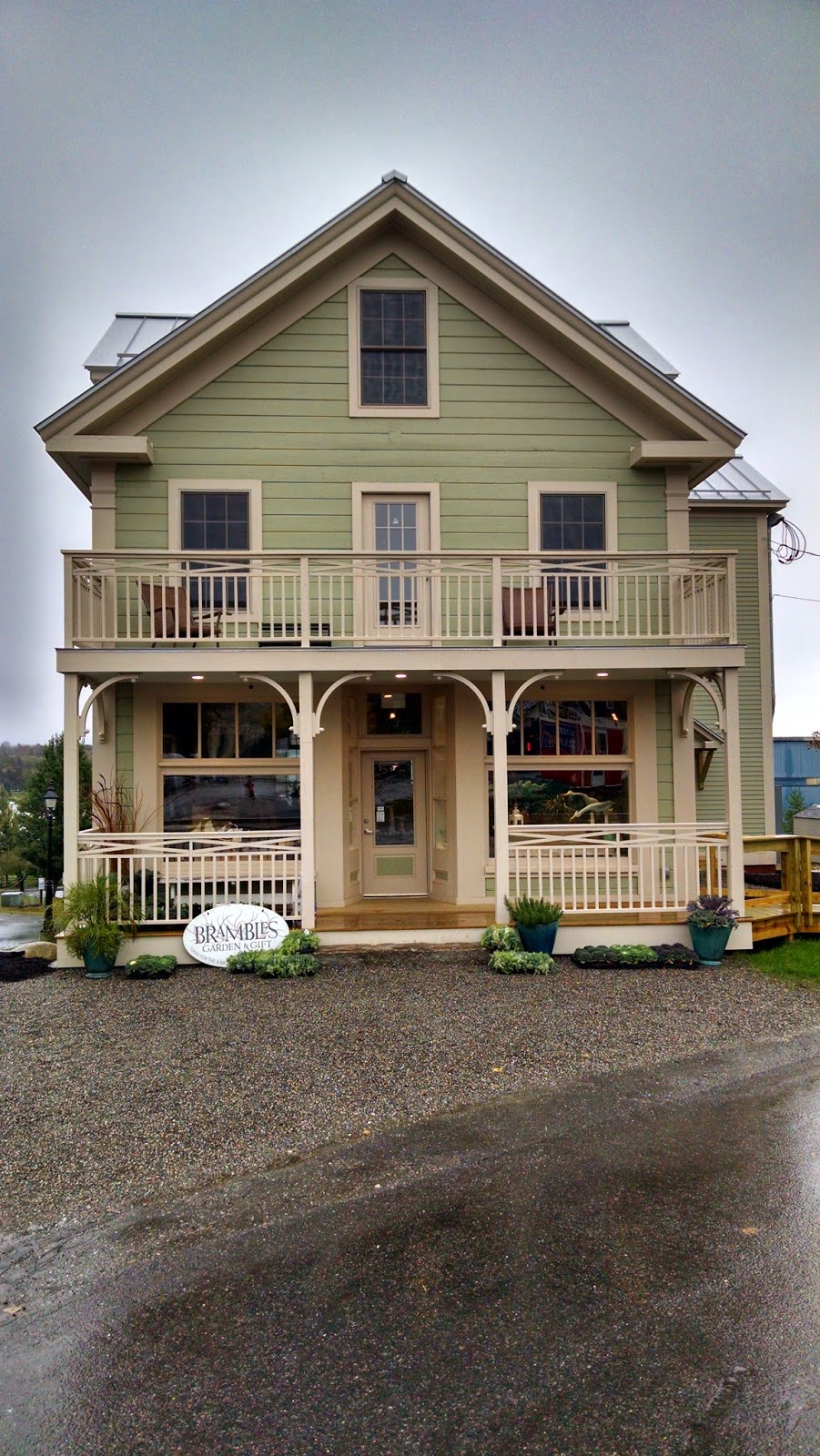 If anyone has or knows of interior photos of the Ocean House from years past, I would love to know about them!!  Thank you to everyone who has regaled us with stories or passed us photos in a bar (you know who you are) or just emailed me with tidbits....keep it coming!

In which a lease is finally signed for the lower level!

Yesterday was a momentous occasion.  We finally signed a lease with our tenants for the lower level space!  In coming to know our tenants more, it was evident that we both want the same things for the lower level, and have some of the same design aesthetics.  Whether it was a good move or not, we all agreed to have our lawyers work on a lease that we would both be comfortable with in the end.  That was almost five weeks ago!  Yesterday, both parties were fed up and we decided to just go with the last version of the lease rather than wait for the lawyers to dicker more.  Then the lawyers came back to say..yes, you can all sign.
We have a new restaurant space in town now!  The proprietors want to be open as soon as they can, which I hope means that they will be open for "New Years by the Bay."  The build out is extensive and very cool.  Greg and I are really excited!

Welcome to the Ocean House, Alex and Clementina!  We can't wait to have you in the space. 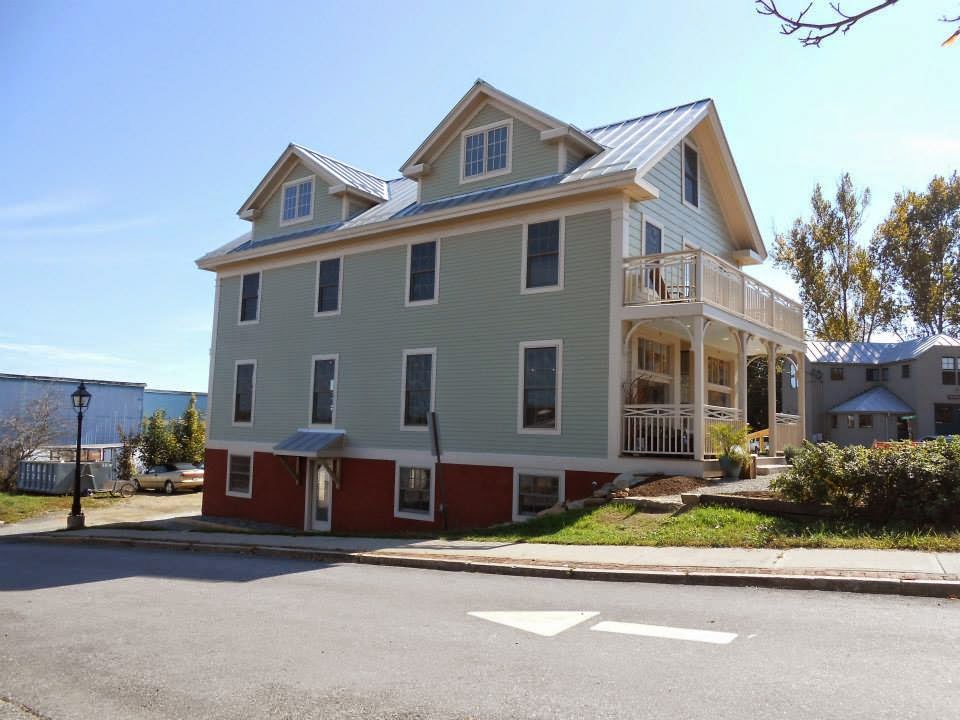 This is the Federal Street Facade, and the restaurant will go in on the red level.

In which I dig heat pumps

It is starting to get colder here in Maine, the nights have seen temps dip into the high 20s and we have already had two snowfalls.  The first, around Halloween, took out our power for five days.

We have three heat pump units installed in the apartment so far...the ones just on the first floor.  I set them up and left them on to see how well they would heat all 2400 square feet and they performed very well. The whole apartment is now a consistent temperature.  Granted, winter has not really arrived, but I wanted to make sure that we could handle just having three units working just in case the heating guys didn't get the rest of the units up and running...we have the units, the heating guys are just taking their time....

We have two units running in the open space of the first floor of the apartment, one in the living room and one in the hall, just under the stairs.  There is a third, smaller unit in the first floor bedroom, but I haven't turned that one on yet. 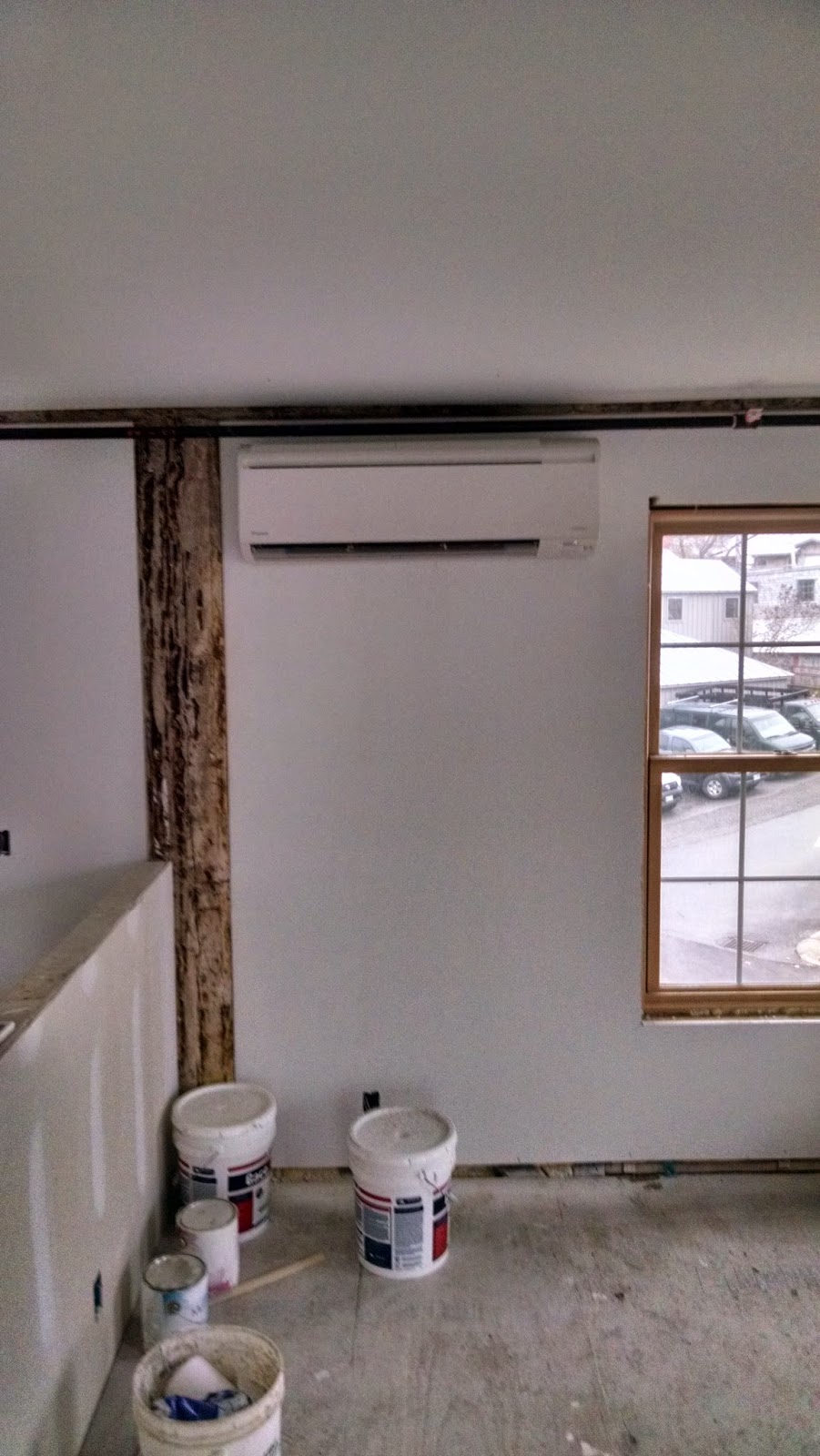 I have reports from the first floor tenants that their unit works beautifully and they are so far happy with it.  Lisa turns hers down to about 50 at night and she says it doesn't take much time for it to get going in the mornings. The heating guys installed Daikin systems that have the ability to heat and cool as well as dehumidify.  The units are very quiet both inside and outside. 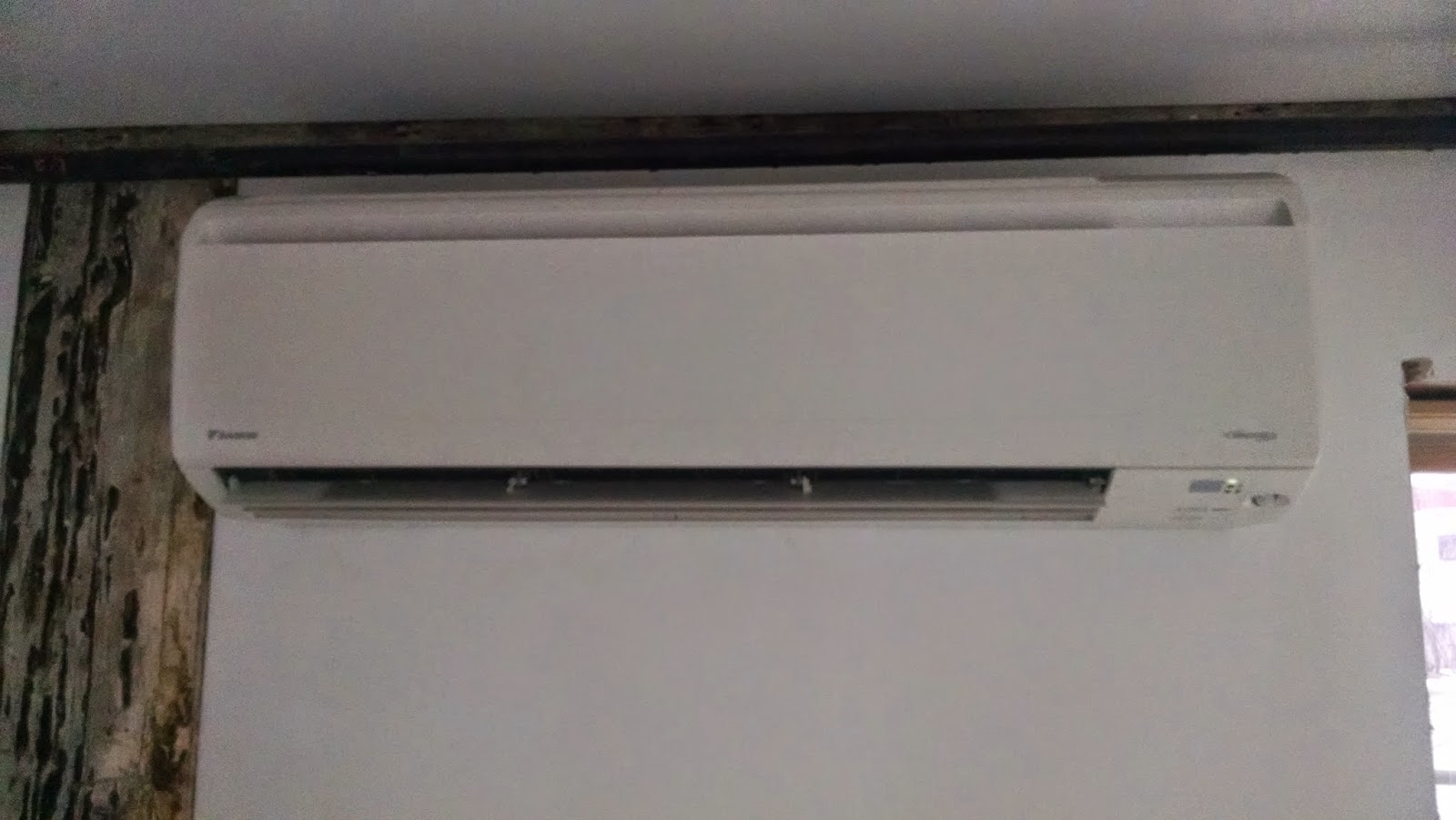 This is the unit that pretty much heats the upstairs.  I am satisfied with the tightness of the building...I can be upstairs in the apartment and never hear what is going on outside because of the insulation in the walls.  3" of corbond on the inside and 1.5" thick blue board on the exterior. 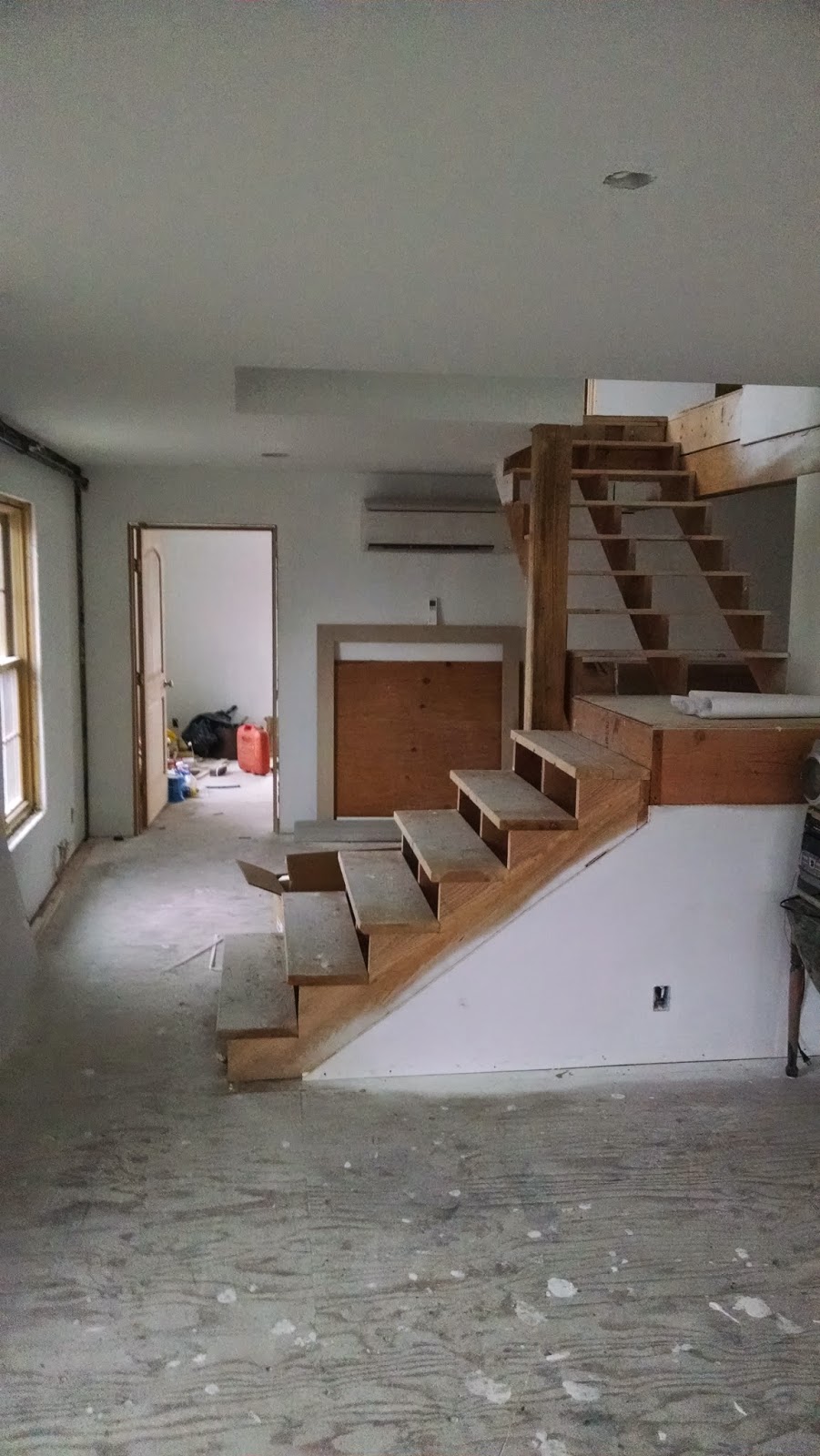 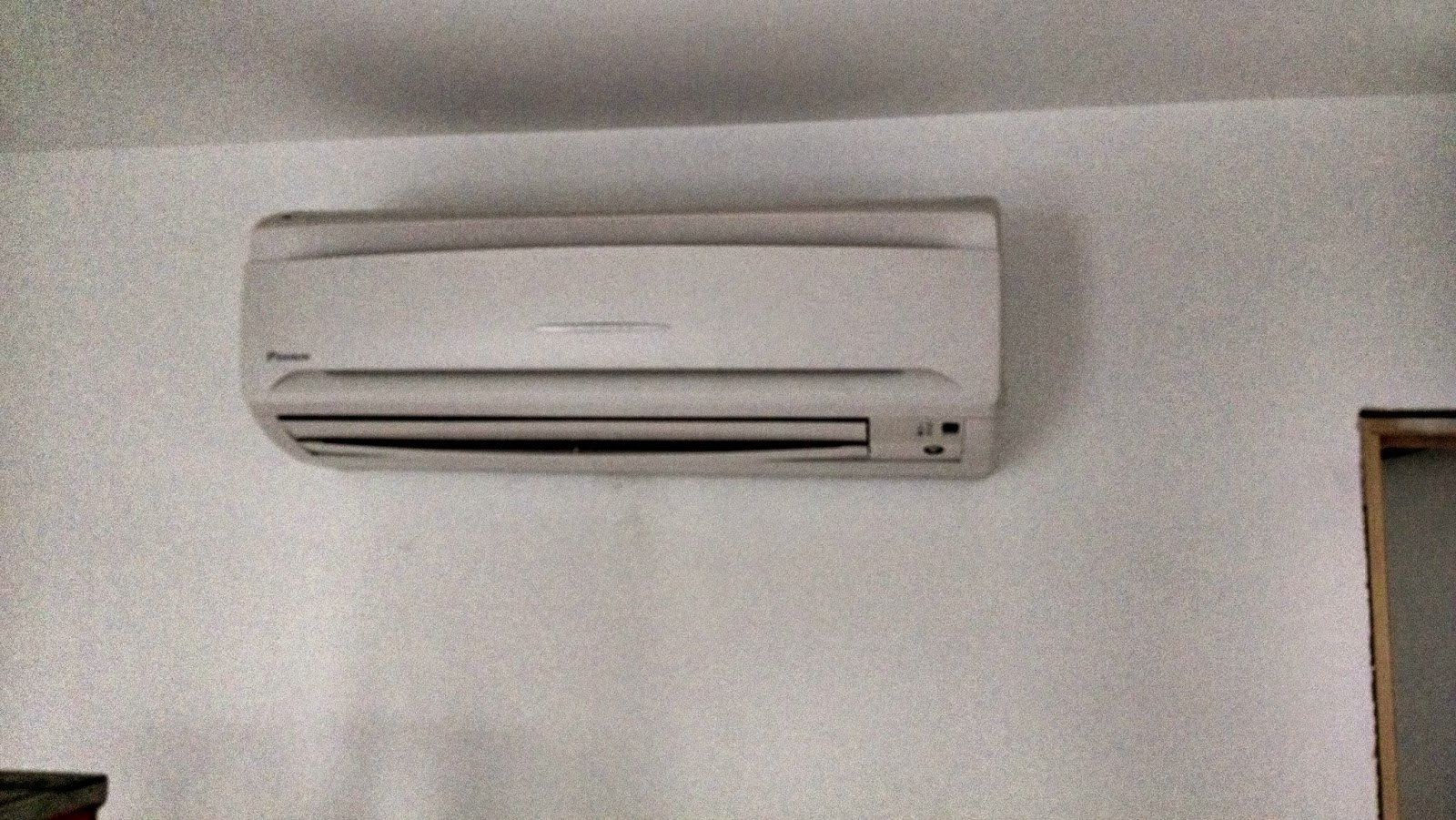 The outside row of compressors which are quiet.  The unit under the window is the cooling unit for the commercial flower cooler on the first floor of the building.  Now that sucker is loud!  One more compressor and three more units on the upper floor need to be installed to complete the work. 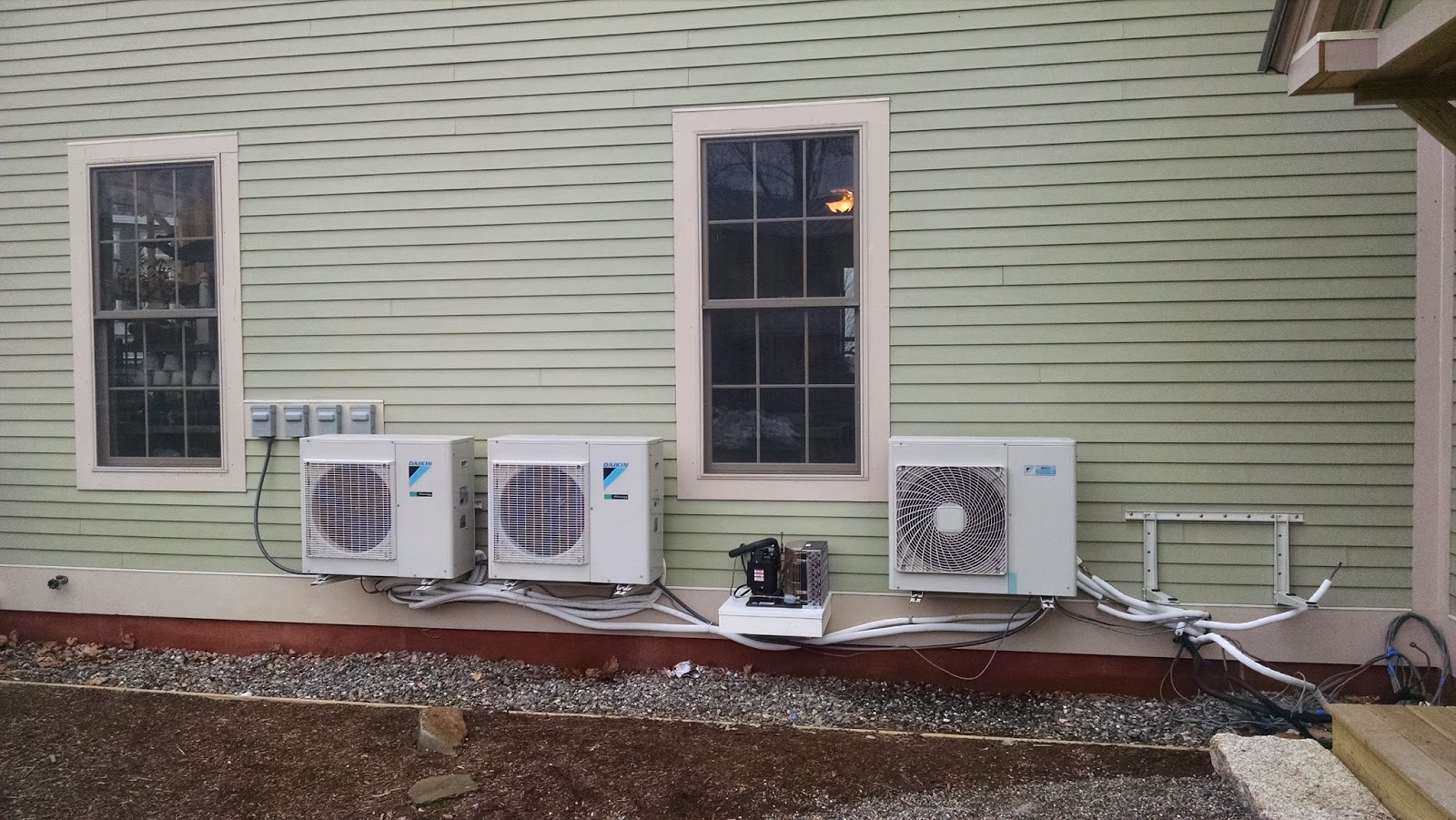