Design inspirations for Slum and Blight

Greg and I have been craning our necks everywhere we've been for design inspirations and funky, interesting ideas for buildouts.  We were at Little Door last night for dinner in Los Angeles and decided if we were ever to open a restaurant in the shed space (calm down, ain't happnin') we could really make the interior interesting and funky with old doors and auction finds for decoration, while serving really good comfort food and nice Brazilian Jazz on the speakers.  Make it cozy and they will come, right??


We've seen a good amount of painted concrete floors, something I want to do in the gambrel roof shed for a floor...I have in my mind a painted and rubbed floor resembling a burnished gold / bronze surface.  I think it would be stunning.   Copper sheeting and wood trimmed wainscoting is something else I thought of while in a bar in Santa Barbara.  I just found this example of a aged copper sheet to be had on the internet for $350.00 a 3 x 4' sheet.  There has to be an interesting treatment we can figure out ourselves.  I love some of the colored copper sheets offered online. 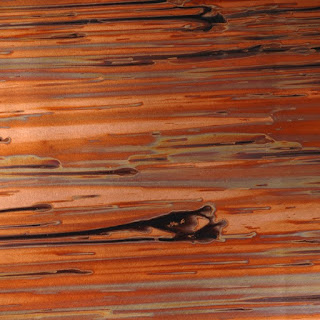 Pebbled walls and strips of complementing veined marble tiles were also in our fantasy mix of building materials.

At the Palm Springs pre-fab show, we had confirmation of our idea to add a repurposed shipping container or two to the back lot, adding a few smaller, affordable retail spaces for vendors.... 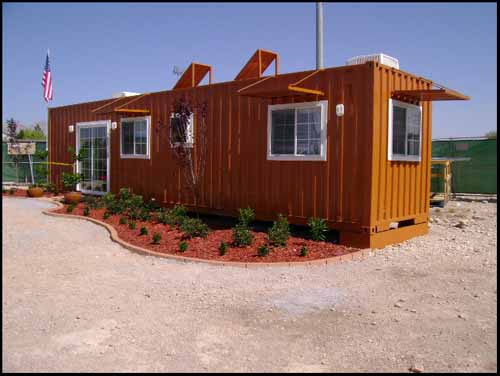 Email ThisBlogThis!Share to TwitterShare to FacebookShare to Pinterest
We are pushing back possession of the building by a week, ostensibly because of all the snow.  Was told last night that most of everything on the top two floors is out, but the rest of the place has to be emptied....ummm, that is where most of the stuff is!!  We'll see if he can get out in time.  Officially, everything left in the place by the 1st of next month belongs to us, but the more he can get out the better.

Heading home today.  Cross your fingers that we can get through the snow storm with out problems!

We are here in Los Angeles for the last two nights of our honeymoon with friends of ours...or so that is the plan thus far.   I see New England is supposed to get walloped with several more inches of snow and ice the day we are to fly home.  We could stay until Friday, but that would mean our first day of possession of Slum and Blight building would be spent on a PLANE.  I mean, how would we get in?  I also have to leave Friday for Boston and auctioning for the weekend~the March sales in New England.

Well, I will start updating this blog once we get into the building.  We have been bantering around ideas for the last several weeks on what exactly to do with the space and we are still unsure.  There are so many possibilities that it makes my head spin.

Moving Day at Slum and Blight 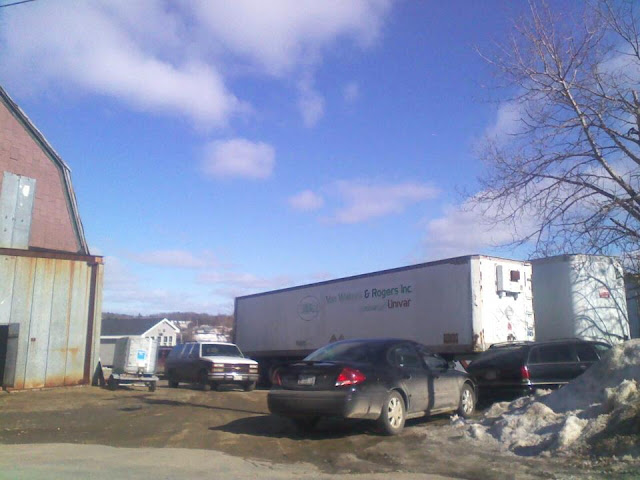 While we are currently on vacation a continent away, things are progressing at Slum and Blight.  I received a photo from one of my Belfast friends that shows two big rigs now in the parking lot, ready to receive all the stuff from inside the building.  I wonder what will be left?  We take possession on the first of March and everything left in the building will revert to us.  I wonder if he will be able to clean out the place in the next 6 days.
Good luck Winston!
Posted by seth at 7:52 AM No comments:

I never knew there were so many different gambrel roof lines!

What a super nice day to drive around and look at architecture.  Last week, I commuted for three days from here to Fairfield, ME for a multiple day auction session for my "real job."  I noticed with increasing interest that many of the buildings on route 137 out of Belfast are gambrel roof buildings similar Slum and Blight (see the first photo below).

From Wikipedia: Gambrel is a shortened name for a gambrel roof shape, a usually symmetrical two-sided roof with two slopes on each side. The upper slope is positioned at a shallow angle, while the lower slope is steep. This design provides the advantages of a sloped roof while maximizing headroom inside the building's upper level and shortening what would otherwise be a tall roof. The name comes from theMedieval Latin word gamba, meaning horse's hock or leg.[1][2] The term gambrel is of American origin[3], the older, European name being a curb (kerb, kirb) roof. Europeans historically also did not distinguish between a gambrel and a Mansard but called both types a Mansard. In the U.S.A., various shapes of gambrel roofs are sometimes called Dutch gambrel or Dutch Colonial gambrel with bell-cast eaves, Swedish ~, German ~, English ~ , French ~, or New England gambrel.

I found it fascinating that Route 137 should have so many gambrel roof lines, but route 7, which runs pretty parallel and is only a block away is almost devoid of them. 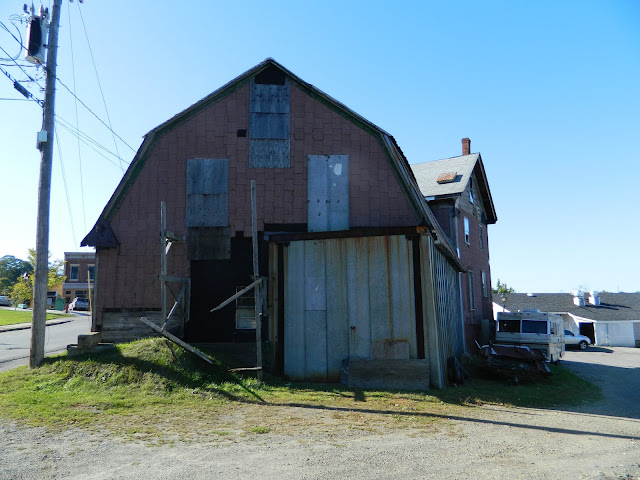 The Slum and Blight roofline is very flat and kind of ugly.  I was hoping for ideas to snazz the exterior up (you know, for when we have a lot of money to fix this place up!) and when we can get that bloody door out of there!!

I like this roof line cause it's so curvy, but it would probably be too much for ole Slum and Blight to handle. 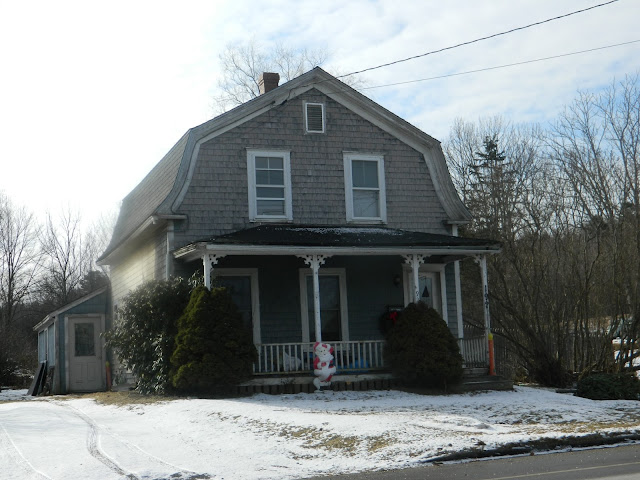 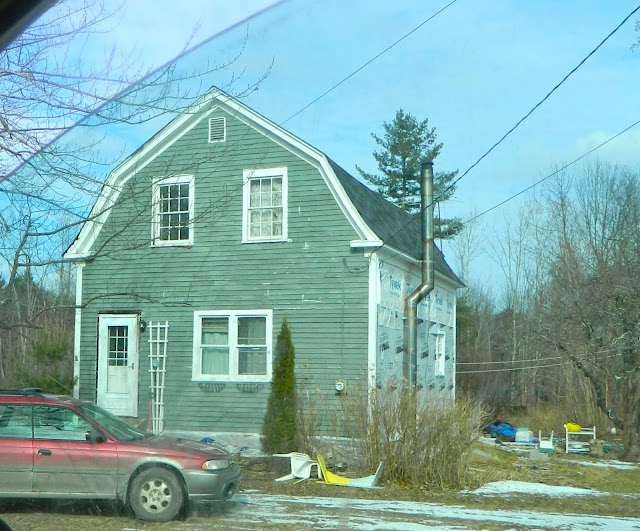 This gambrel is directly across the street from the one above it, but the roof line is completely different. The line is flatter like Slum and Blight's,  but there is that return at the bottom that frames out the roof nicely.

This is more like what the roof will look like when we replace it with a new green metal roof.  It looks to me like the installer bent the lower panels to follow the kick-out of the lower portton of the eave. 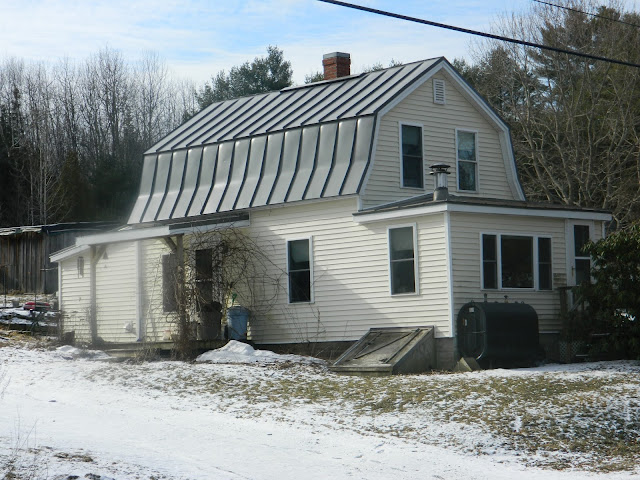 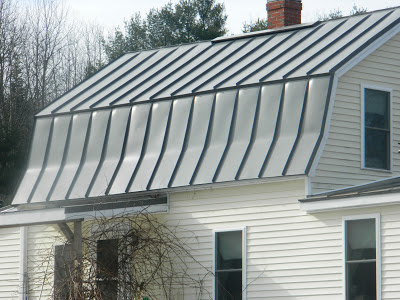 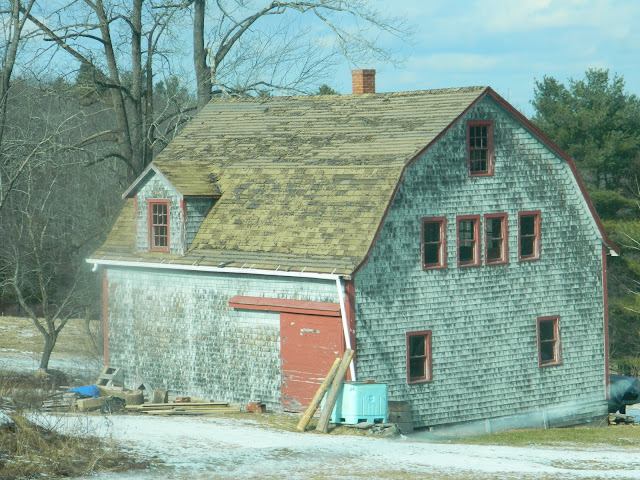 Perhaps one of my favorite buildings in Belfast.  I just adore the lines of this barn.  I think the roof and the barn are very well proportioned.   I would love to see the Slum and Blight shed have this much good character rather than the scary character it emits now.


We are still on the lookout for the one gambrel roof barn I saw with really good dormers.  Turns out there is enough room in the shed at Slum and Blight to put in office spaces or just rentable spaces upstairs.  When I find the building again, I will add that photo here cause I think the dormers work really well and would fit with the character of the shed and the original building and would tie them together nicely.

Things are afoot at Slum and Blight!

We collected our first rent yesterday!  Feels good to put money in the bank before we start draining the account once we take possession.

We are here for another 10 days this month before we leave for a few weeks of sun and sand and honeymoon!  We can't wait, but I have resolved to start thinking more about the building these next two weeks.  I want to get the furnace cleaned and assessed by Jim's Burner Service.  Apparently, the vegetable oil burner is not working and so we will probably abandon the idea of keeping Winston's practice of burning vegetable oil when available.

I also heard from one of my spies that things are moving along over there.   Seems to be a fork lift and a trailer and a lot of big things being moved out of the building.  I am glad.

We fully expect to find that some of the stuff that is currently in the building will remain.  I told Greg that when the weather gets better, I would throw open the garage door on the front of the building and just put a sign that says "Junk...by chance"  with an arrow.  An ad in the paper will bring folks around to see what they can scavenge for cheap.  I find that the most amazing things sell when given a chance. We would rather repurpose what we can than throw it away.  I am going to have fun doing that!.

I received an email about the history of the Slum and Blight building from Belfast Historian, Megan Pinette.  In the email she writes "I believe it [the building]  was built following the 1865 fire and escaped the 1873 fire. On the Sanborn insurance maps in the late 1880s & 1901, the building stands alone, no addition to the right or left. Around 1900 it was the Ocean House Hotel run by Frank Nash, who also lived in the building. I don't think he ran it for very long, does not appear in the 1907 census."

Megan also told me that she believes it to be one of the most unchanged buildings in the downtown area.   No pressure there!!!!

This would have been a small hotel, but in 1900, who was coming to Belfast to stay?? 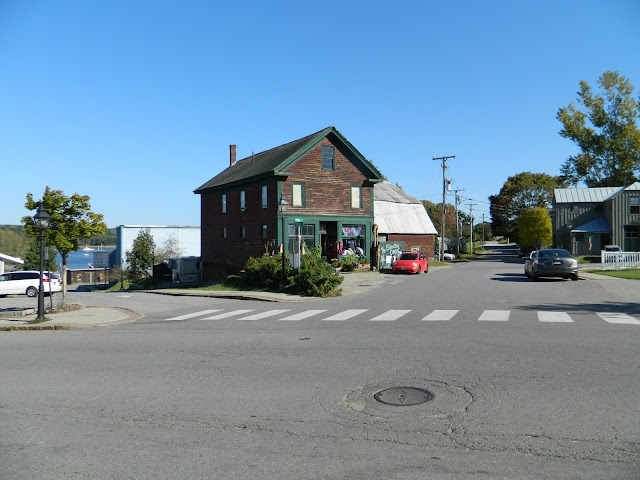 Though just speculation, I think the shed was added around 1914, when the Farmer's Union was first organized.  It is still used as a shed, but I can see a restaurant or some more downtown retail spaces there.  The shed looks huge from this view, but really isn't.  There used to be a Mobil station right where the grassy area is in this photo.  The land is for sale, but I think it makes a nice park and gives us great access to Main Street, which is where I am standing. 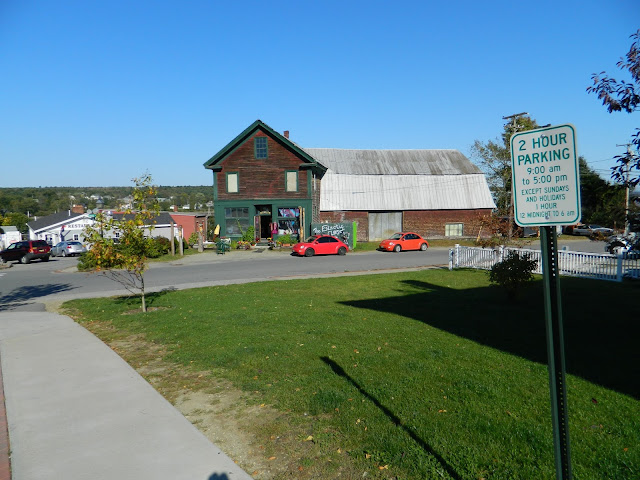 We would like to replace the existing roofs on both buildings with a green metal one to make the buildings flow together better, but we have to decide if there will be rentable space on the second floor of the shed and if so, if we will cut dormers into the roof line.  I favor dormers that match the somewhat Greek Revival lines of the pitched roof on the main building. 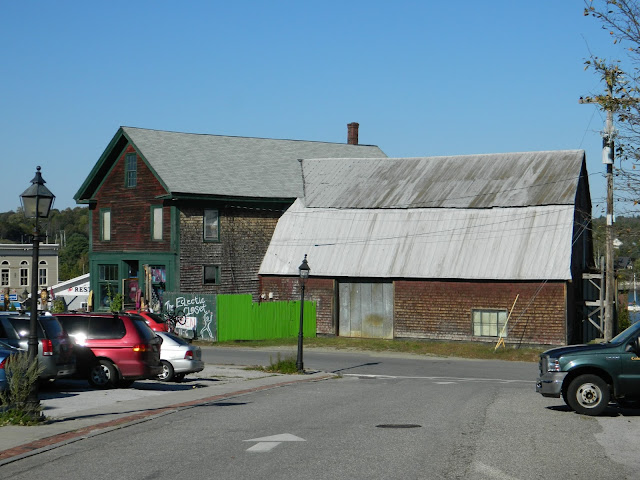 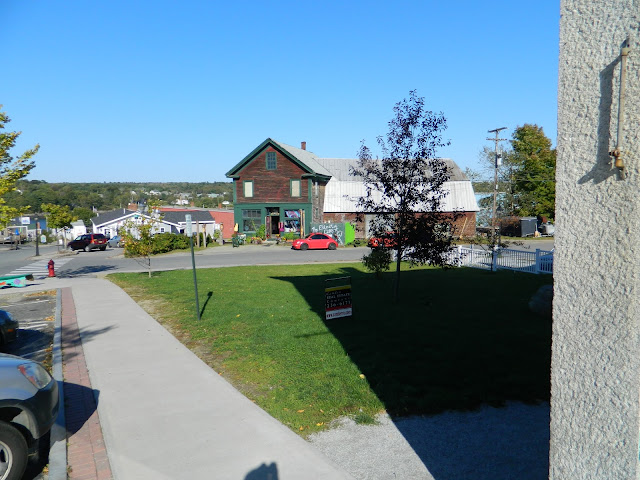