In which there are updates

It's November already!  We just welcomed in our winter renters. I am sitting here in the apartment with the Direct TV guy.  Now every room in the house is wired for 175 channels of reruns and "reality, "and there are three free months of movie channels showing repeats of stuff you didn't want to pay to see in the first place. But, as one prospective renter for next summer put it..."I do love my Jeopardy!"  I always say, I haven't had cable since 1992 when I moved long-term to Chicago and thought it outrageous to pay to watch TV.  Of course now I can selectively stream shows and binge watch on my computer, so who am I to judge?
But I digress...Last you heard from us, we had just finished our final construction day at the building and were waiting for our first renters.  I have to say that all of our renter experiences this summer were really positive ones.  Our first renters bought us champagne glasses and a guest book and a few other things I am still coming across! AND, they came to the Our Town Belfast auction and bid and bought a few things.  So, bravis to my first group.   The second group of renters came from Airbnb, so I was a little nervous, because we don't get to take security deposits or a downpayment, so they could cancel at any minute.  Again, we had three couples stay and the review they left us, in the guestbook that our first renters provided, was really sweet and affirming. I have already spoken to one family who spent four days in the apartment and then recently emailed to say they wanted the space for the first three weeks of August.  So far, everyone got what we worked so hard to do and that was grand!  We had three families rent and the place was always as clean as when they took possession.  I did have to scrub pretty hard on some stains on a chair, but they came out eventually.  And all I can say is hooray for the durability of a Lowe's 100% plastic rug. I get all sorts of spots out with just some simple green and a rag!  Ironic, I know.

I personally threw two parties there, one for 20 people and one for 100 people and it worked pretty well, though I did have to import a bunch of trays and pans and stuff. I don't know if there were other parties or family reunions up there besides our double family reunions.  Greg and I had a couple of small dinners up there when we didn't have it rented and it is a comfortable space for living and entertaining.  I think the place was used well and hard for its first season and came through with flying colors.  I go up and tweak things when people aren't around.  We ran out of time in the beginning summer, so, our first renters contended with this: 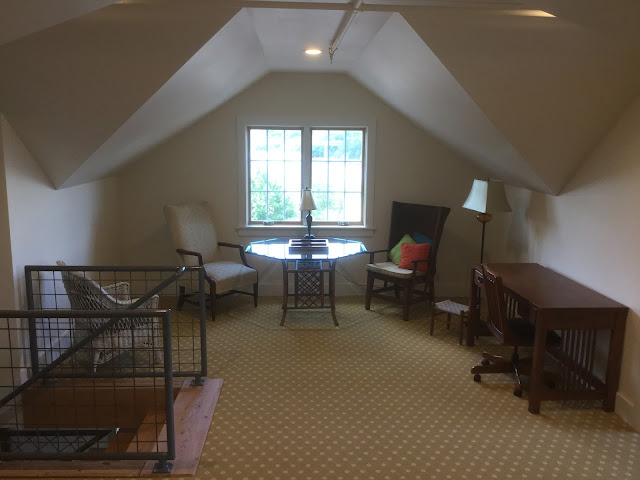 Which to me, looks pretty awful now. Even the photo below looks terrible because I hadn't gotten around to lights and pictures or cozy things. So, at some point I will need to retake some photos because they don't look great.
Anyway, we made the game room into an upstairs den with a pull-out couch.  Now each bedroom has living area separate from the others.  I did put our maximum rental up to eight because of this couch, but after the first season, we decided to max at 6 and charge more per each guest above that.  As the person who cleans the place after the renters, I think that is fair.  Most of the Airbnb rental inquiries I get are for 8 people or more, and we just can't handle that. 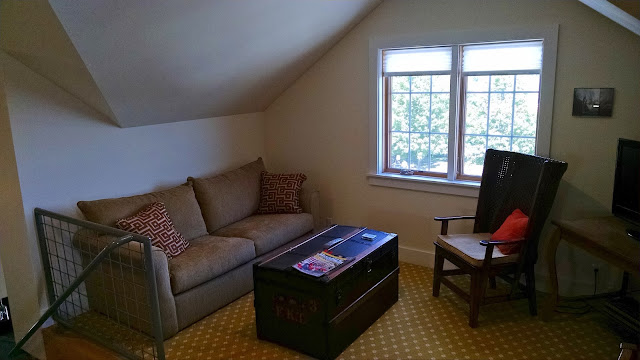 Our original plan to hawk the apartment to the ship yards in town as possible winter rentals paid off. The first group who thought about the apartment for their base decided to rent in Camden for the winter.  The second group we showed it to took the space for five months and they are currently staying there.  We are excited to have them and excited for them to experience all that Maine has to offer for the winter!  They also liked the flexibility of the apartment and the privacy each space afforded the other.

So, as Greg keeps saying to me, "our evil plan is working!" and he is right--build it and they will come.  It's nice to have 100% capacity for the next block of time is how I think of it.